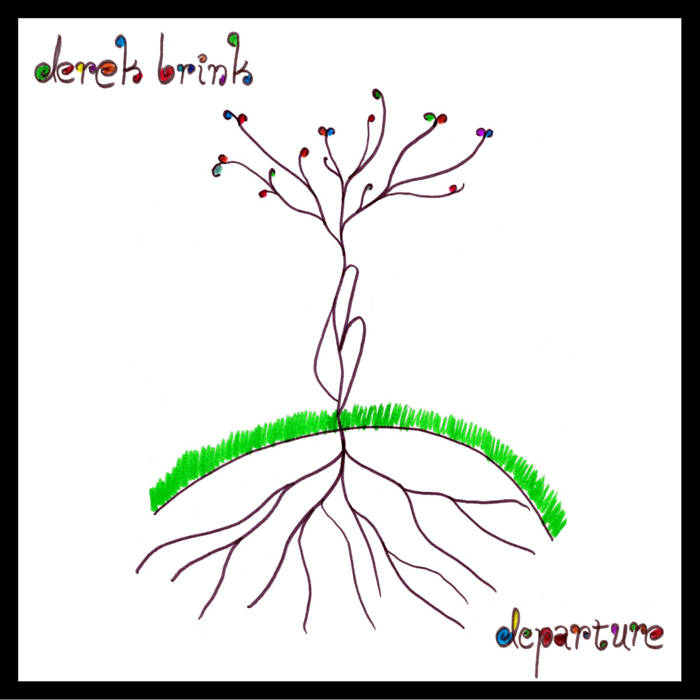 This wasn't supposed to be my 11th album. It was supposed to be my 12th. But then the world got hit with COVID-19 and the album I had in mind for #11 took a backseat. That one will come out later, assuming the virus (or something else) doesn't kill me first. But when so many of the people who are likely to listen to my stuff are stuck in lockdown and some of them are getting sick, a standard Derek Brink rock album about girls and how my day-to-day life is so "difficult" just didn't seem very relevant. So I chose to work on this one instead.

"Departure" is a completely instrumental album. I've never done that before, but I've had it in my head to do it for a long time. I chose the title "Departure" not because I'm going anywhere, but because this is very different from everything else I've done. I've had that title for the album since 2009. I've been stockpiling music for it for even longer than that. Some of these tracks date back to the 1990s! There's a chance that if you've been around me as a bass player for a long time you've heard me play at least one or two of these as bass solos in the past. Now they're all fleshed out, full songs.

Writing instrumental songs is different from writing stuff with lyrics. So many of my songs depend on the lyric being the "important" or "interesting" part and the music is just a means to an end to get my words out there. Can't do that on this album. An instrumental song needs to stand on its own and something ELSE has to be "important" or "interesting." For many of these it's the bass guitar that fills that role. For many of them it isn't.

It's also a deeply personal experience to write an instrumental track. You're using sound other than your voice or words to communicate a feeling. You're expressing yourself with no expressions. Each one of these songs came from something inside of me that needed to come out. Each one carries an emotion or a feeling that I would've had difficulty describing in words, so I kept my mouth shut. You'd think there wouldn't be a lot to say about instrumental pieces, but the truth is there's so MUCH to say it's impossible to know where to start. As you click through the tracks on this album, I'll try to write some notes to go along with each one...but know that whatever I say won't be sufficient and there's a much deeper part of me that you can only hear in the notes. Or maybe in the space between them.

I hope you enjoy this album. And ultimately I hope you come to think of it as a single work, rather than individual tracks. But you probably won't. That's okay. Music speaks to you in whatever way it does and you're not wrong to think whatever you think. But it makes me happy to think of this as a single piece. Like I finally wrote my concerto.

More than anything, I hope you're happy, healthy, and that the social distance isn't too hard for you. I hope we all get to see each other soon.

I played everything but I want to credit my list of influences, some of whom are obvious but some you might not realize.

During the process of making this album over the years I was inspired by the following musicians/bands (in Alphabetical Order):

Thank you to the usual list of friends and family, of course.

However, since this is my most “musical” album so far, I want to take a moment to particularly thank the following music teachers, each of whom played a foundational role in shaping how I view and play music. I would not be able to arrange a song without the lessons they taught me. I fall back on their lessons often and have deep gratitude for their work with young artists who needed guidance. This list goes back to the 1980s and I am producing the names from my memories of the time. My apologies if any names have changed, or if anyone is no longer with us. (So it goes.)

This album is dedicated to the following, in chronological order:

Alan Moss - My Elementary School Band Teacher. Everything started HERE. He was gracious, worked well with children, and recognized passion when he saw it.

Barry Rudert - My Elementary School Choir Teacher, who used to throw chalkboard erasers at the kids he didn’t like.

Mary Sweeten - My Jr. High Band (7th grade) and Choir teacher (8th grade), who predominantly taught Orchestra and once (jokingly) yelled at me for not telling her I was a bass player until she had taken another job and was leaving the school.

Wade Dowdy - My Jr. High Band Teacher (8th grade) and Senior High Music Theory Teacher. He was nicer to the Theory Geeks than he was the average Band Nerd.

Mr. Kevin Koontz - My Senior High Choir Teacher. He remains the kindest person I’ve ever met. His words kept me going more than once. I loved hearing him play the piano and sing. Choir was the only part of my life that made any sense, and I think he knew that. I am sorry I didn’t include any choral parts on this record, Mr. K. (If anyone knows how to get in touch with him, I'd love to say hello.)

Shannon Abney - My Senior High Orchestra Pit Conductor. Even though she stopped talking to me in my Senior year because I had to back out of playing bass in the Pit for the school’s production of “Camelot” due to having regular panic attacks. That was a kind of learning, too. But being there for Guys & Dolls was fun.

Mike Franzel - My first Bass Teacher, who helped me realize and believe that I KNEW what I was doing.

Barry Segel - My last Bass/Theory Teacher who KNEW I knew what I was doing and helped shape and direct it.

Ron Wofford - My College Theory professor. Only did one semester with him, but I still have the course-book!

...after that, I started doing my own reading...